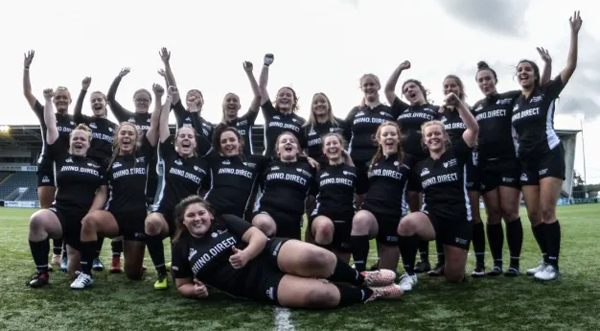 A Northumbria University student and first team rugby player has been named in the England Rugby Women U20 squad.

Caitlin Simpson, a first year Applied Sciences student, was selected to join the core 24-player group for the 2019-2020 season. The core cohort, as well as those invited on a camp-by-camp basis, will come together for a three-day training camp each month.

England Rugby’s 2019-2020 season focus for this age group is to develop players as individuals. As a result, the competition period has been moved to the summer of 2020 to allow maximum progression both within and outside of international training camps.

In addition to the training camps, players will be able to gain further experience of competitive rugby through the Tyrrells Premier 15s, the top tier of the women’s English rugby union domestic league system run by the Rugby Football Union (RFU), and through BUCS [university] leagues.

Simpson plays for Tyrrells Premier 15s club Darlington Mowden Park Sharks and Northumbria’s first team. After having her spot on the England Rugby Women U20 squad confirmed, Simpson said: “I’m really excited to be selected in this seasons under 20’s squad – it will bring new opportunities for me to develop as a player, and person on and off the pitch.”

Turner said: “We’ve selected a squad with the intent of player development over the course of the season.

“All players are aged between 17 and 20 so we have a real range, depth and breadth of talent.

“The majority of the group are linked to Tyrrells Premier 15s clubs which allows us to continue working together with those in the domestic game.

“The camps will allow us to focus on the detail over the next seven months and we’re all looking forward to getting started.”

The news of Caitlin’s appointment to the Women U20 team comes as the England Men’s reach a Rugby World Cup semi-final for the first time in 12 years with a team captained by Northumbria University graduate Owen Farrell.

Facilitated by the Rugby Players’ Association, Owen graduated from Northumbria’s BA Leadership and Management Distance Learning course in 2018. Now, following in their captain’s footsteps, prop Mako Vunipola and winger Anthony Watson are also in their final year of the same business management and leadership course with Northumbria.

Northumbria is a research-rich, business-focused, professional university with a global reputation for academic excellence. To find out more about our courses go to www.northumbria.ac.uk

If you have a media enquiry please contact our Media and Communications team at media.communications@northumbria.ac.uk or call 0191 227 4604