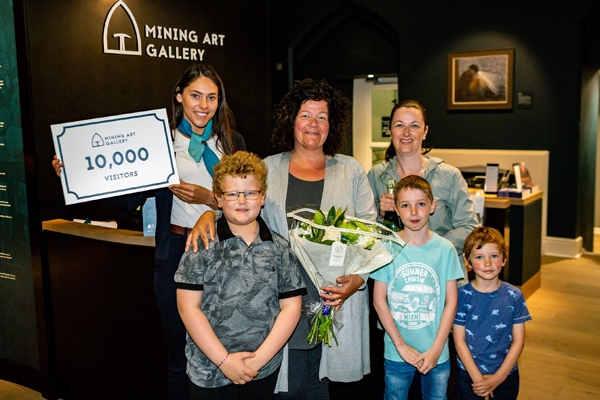 A County Durham art gallery, dedicated to the region’s coalmining heritage, celebrated a milestone moment this week after welcoming its 10,000th visitor.

The Mining Art Gallery, part of The Auckland Project reached the landmark figure, just eight months after its launch when Claire Vickers and her seven-year-old son Jack Bell walked through the doors.

Claire and Jack visited the gallery, in Bishop Auckland Market Place, with family friend Joanne Ames and her sons Elliot, aged 9 and Isaac, aged 5. The group, who are all from Bishop Auckland, decided to visit the gallery during the half-term school holidays to take part in family craft activities together, creating their own banners for the Durham Miners’ Gala in July.

Launched in October 2017, the Mining Art Gallery attracted more than 2000 visitors in its first week, as people flocked for an opportunity to see powerful art from prominent local mining artists such as Tom McGuinness and Norman Cornish.

Since then, visitors have come to the gallery from across County Durham, the UK and international locations such as France, Spain, America, South America and Canada to see the works on display, which evoke both the arcane underground world of the coalmines and the closely bound communities of the surrounding pit villages and colliery towns.

More than 300 visitors have taken part in the family crafts and activities, which regularly take place in the Mining Art

Gallery’s learning room, from making their own mining banner to painting portraits using boot polish, a technique sometimes used by mining artists when paint was in short supply.

The gallery is run by team of 50 staff and volunteers, who also run daily Working the Seam talks, digging deeper to reveal more about the artworks on show.

In preparation for Durham Miner’s Gala in July, children visiting the Mining Art Gallery during May half-term will be invited to design their own Big Meeting Banner. The best drawings and crafts created between Friday, 25 May and Friday, 1 June will be displayed at the Gala itself on Saturday, 14 July.