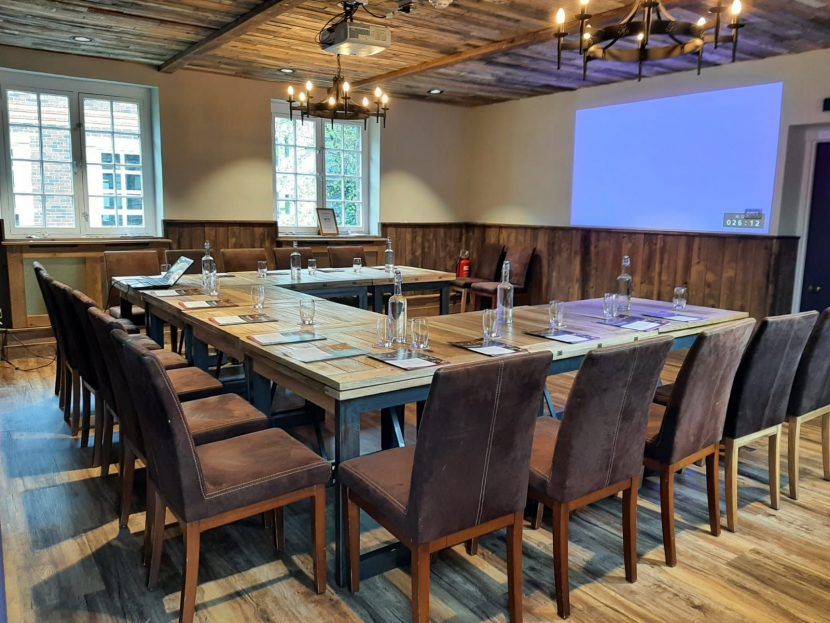 Corporate events with a difference are on the menu at Blackfriars in Newcastle, thanks to the addition of their new medieval-inspired meeting rooms.

The owners of the complex have transformed the former sleeping quarters of the ‘Black Friars’ into Dormitory Meeting Rooms which are now being used to host board meetings, away days, presentations, workshops, wine tastings and private dining.

The space includes a meeting room which overlooks Blackfriars’ Cloister Garden, which can seat up to 30 people in a range of configurations, and has a ceiling mounted projector, screen and sound bar bringing the room up to date for 21st century meetings.

Alongside the meeting room is a breakout area as well as the ‘Snug’, an intimate cosy room with comfortable sofas and its own private bar for informal coffees and drinks receptions.

The interior of the rooms has been designed in a way that’s sympathetic to the 13th century building and in-keeping with its heritage with rustic wood panelling, medieval style doors, ornate lighting and artwork, combining medieval with a modern and elegant twist.

The three individual rooms have been created for multi-function and have their own personality but also flow as one area within the building if opened up.

The Dormitory Meeting Rooms are steeped in history having originally served as the sleeping quarters for the Black Friars from 1239 and then in the 16th century, they housed the city’s Crafts Guilds who met at the complex.

Andy Hook, Managing Director at Blackfriars said: “Blackfriars has been used as a meeting space for hundreds of years and we are delighted to have restored the rooms for a variety of private and corporate events.

“The rooms offer a quiet sanctuary in the heart of Newcastle, overlooking our beautiful Cloister Garden. We have brought them back to life to create a unique meeting experience combining all the modern features clients need such as built-in AV equipment, USP ports and free WIFI”.

The Dormitory Meeting Rooms are located within the Blackfriars complex, next to the restaurant, Banquet Hall, Parlour Bar, Cookery School and Tasting room for additional corporate entertaining.

Clients can also benefit from award-winning catering from the chefs at Blackfriars, who were responsible for the restaurant winning the Taste of the North East accolade in the North East England Tourism Awards. They provide coffees, teas, hot or cold buffets, canapés or dinner and bespoke catering either in the meeting room or in the restaurant.

Blackfriars is owned by the Hooked-on Group which also has Dobson & Parnell on Newcastle quayside and Hinnies in Whitley Bay.