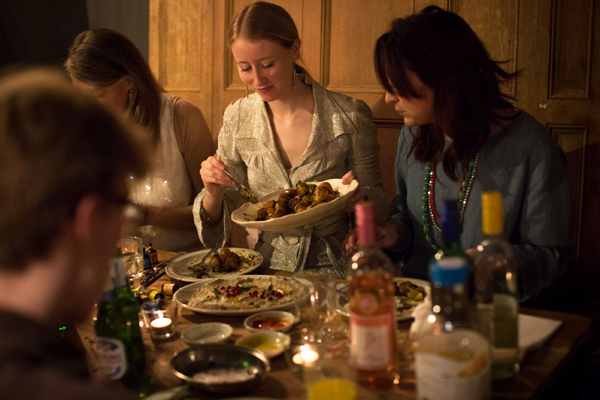 The all-new foodie event celebrated the Ouseburn gallery’s new autumn exhibition, which launched with a special event next door on the same evening and features a line-up of creative pop ups.

The Kitchen Takeover was an informal dining experience, with parties seated at communal tables and tucking into sharing platters of Mediterranean-inspired cuisine from Papa Ganoush, a family-run business with two restaurants in Jesmond and Whitley Bay.

Two sittings were available in Artisan at either 6pm or 7.30pm and this will be followed by an after party from 9 to 11pm featuring live music from local three-piece band, Los Capitanes.

This was the first Kitchen Takeover to be held in Artisan since it fully closed as a restaurant to become a private hire space seven days a week. Accommodating between 40 and 80 guests, the venue boasts a new specially commissioned 30-ft wall mural from figurative artist Dan Cimmermann and is now a licenced wedding ceremony space. Other public events are in the pipeline, including the return of its weekly street food pop up, Artisan Social, and a neon light gallery showcase, opening this winter.

Rachel Brown, General Manager of The Biscuit Factory, said: “Artisan’s new function as a social space has not only allowed us to reimagine how it looks but also how it can contribute to our broader cultural programming. The flexibility of the space now means we can collaborate with other local independents, providing a platform for them to showcase their creative business and in doing so we can introduce something fresh and a little different to our visitors.”