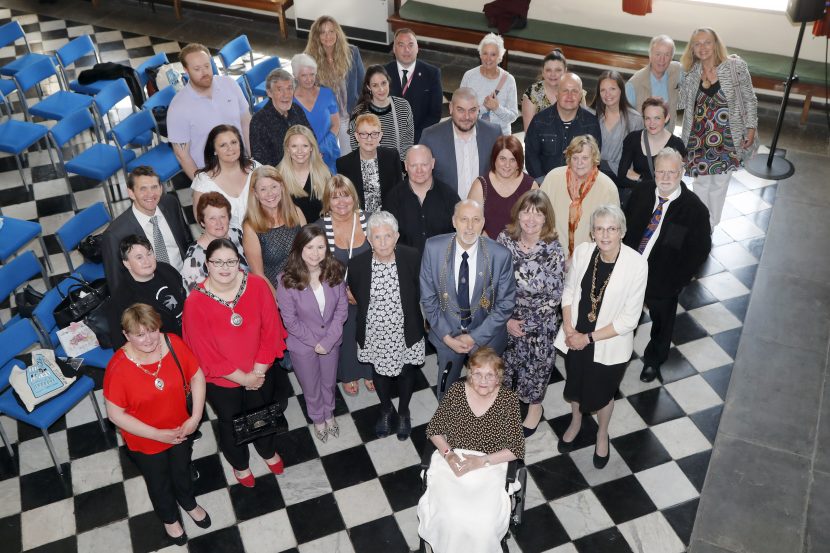 The heroes, nominated by people in Tyneside, had their names cast in bronze plaques which will be fixed in place permanently by the River Tyne.

Their names were revealed at a special ceremony in Newcastle’s historic Guildhall on Monday 13 May.

Each was nominated by members of the public who were asked to choose people who had made a significant contribution to the region, either in sports, the arts, academia or business, over the past 60 years.

Lord Mayor of Newcastle Cllr David Down said: “The Local Heroes programme provides a fitting acknowledgement to people who have made amazing contributions to promoting Newcastle and Gateshead in a variety of ways and very much on the national or worldwide stage.

“What makes it extra special is that our Local Heroes were nominated by local residents and people associated with the North East.

“It’s wonderful that as our Local Heroes are honoured and recognised I’m able as Lord Mayor of Newcastle to take part in these celebrations.

“The achievements of these treasured individuals and their benefit to the region and to others are considerable.

“Their names have been added to a distinguished list of people, who we are proud to say have made a big impact to the social, cultural and heritage fabric of Tyneside and beyond.

“Locals and visitors alike will enjoy walking along the Local Heroes trail and reading the who’s who of celebrated names.”

Ann Cleeves, 64, has two daughters and six grandchildren and lives in Whitley Bay.

She said: “I’m delighted to be receiving this honour in my adopted area.

“I always say that I’m a Geordie by choice and not by birth.

“The affection for the Vera of the books and TV dramas within the region has been overwhelming.

“As for my daughters, they’re much more excited by this than by any of my literary awards.

“A great Tyneside memory for me is launching one of my books in the Baltic gallery.

“It was a beautiful evening and we spilled outside with our guests to have a view of the bridges and the river.

“My publishers thought it was stunning.

“My daughters grew up here, went away to university and came back, and my grandchildren were all born here.

“I can’t imagine moving away from the North East.”

John Steel, 68, is the only original band member playing in the current incarnation of The Animals.

He said: “It means a great deal to be nominated.

“I was born in Gateshead and Ann, my wife, was born in Heaton and we made our home near Rothbury over forty years ago, so our roots are deep in the region.

“I feel privileged to have been a founder member of a local band that became famous all over the world and the songs we recorded still stand up today.

“It is a great honour that The Animals will be remembered on our home turf by this plaque.

“I have so many good memories of Tyneside.

“From the mid-fifties onwards I went religiously to Newcastle City Hall to see some of the greatest jazz and blues and rock names who ever lived. They seemed like Gods to me.

“In 1964 we, The Animals, were given our first really big break when we were chosen to play support for Chuck Berry, one of our favourite rockers.

“It was a major tour of concert halls and on Saturday May 23 The Animals walked on stage at Newcastle City Hall to a full house and I think between us we knew just about everybody in the audience by name. That’s a favourite memory.

“Tyneside is where I’m from, it’s home.”

Kaylee, of Houghton-le-Spring has just celebrated her 32nd birthday and is 31 years post-transplant. She is a “crazy Auntie” to her sister Lindsay’s children, nine-year-old Donna and Kaylee’s name sake, baby Kaylee who is aged three. They live in the USA.

Kaylee said: “This honour means the world to me and I feel very fortunate to have been nominated as a Local Hero.

“I am humbled by this recognition and thrilled to be chosen, as I have always tried to highlight the importance of organ donation so other people could have the same chances of life as I did.

“The 30th Anniversary of my heart transplant was a particularly special day because as a family, we organised ‘Kaylee’s Walk for Life’ to highlight the need for more organ donation and celebrate the success of the paediatric transplant programme here in Tyneside.

“I led more than 30 heart transplant recipients and children with heart conditions from The Baltic over the Millennium Bridge and along the Quayside with my family and my surgeon Professor Christopher McGregor.

“The incredible view of Newcastle and Gateshead Quaysides is so iconic and I just felt very proud to be from this amazing region.

“I was lucky as a very sick baby back in 1987 to be in the right place at the right time.

“There’s no place like home and certainly The Freeman Hospital in Newcastle has felt like home many times over the years.

“But it’s the warmth and humour of the people of the North East who have supported my family and me and signed the NHS ODR because of my story who are so very important to me.”

Kaylee’s Mum Carol said: “We are so very proud of Kaylee.

“She is a kind, caring and amazing young lady who offers hope and inspiration to families who are waiting or those families whose children have received the gift of life.

“To watch her now as a young woman visit a newly transplanted child and speak to their parents or encourage a child at a sports event is testament to the incredible presence she has within the transplant community and yet, the majority of the time, she doesn’t realise the impact.

“Nothing about Kaylee is false and her empathy for others shines through during her day-to-day involvement with the transplant community.

“For a child who cannot remember what actually happened to her as she was too young, this is a true gift.”