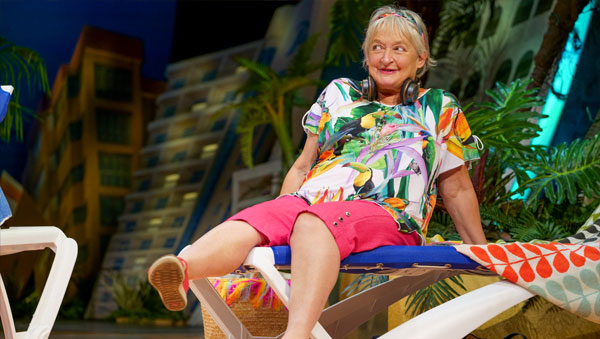 Rid those January blues at Sunderland Empire this month when Benidorm Live checks in for one week only, 14-19 January 2019 for a dose of fun in the sun!

ITV’s award-winning comedy celebrates over a decade of all-inclusive hilarity, having followed the ensemble cast of holiday makers and staff for ten series since it first broadcast in 2007. Critically acclaimed, Benidorm has received two National Television Awards a TV Quick Award and nominations at the British Comedy Awards and BAFTAs since it first broadcast in 2007.

Derren Litten has now written an all new set of Alicante escapades for the much-loved cast members as they swap sangria for the stage – after a quick spruce up at the Blow ‘n’ Go!

After leaving school in Hull in the late 1980’s Derren Litten spent a year working as a professional magician whilst auditioning for drama schools.  He won a place on the 3 year acting course at the prestigious Central School of Speech and Drama where he met fellow student Catherine Tate.

After 10 years of working as an actor, Derren was asked by Catherine to write for her newly commissioned TV sketch show, The Catherine Tate Show; in which he also appeared in many of the sketches.  After co-writing and appearing in two series and a Christmas Special, Derren was given a script commission by legendary comedy producer Geoffrey Perkins, “just write anything you want as long as it’s funny” he said; that show turned out to be ITV’s BAFTA nominated hit comedy Benidorm.

The show is produced for the stage by Michael Harrison and David Ian.