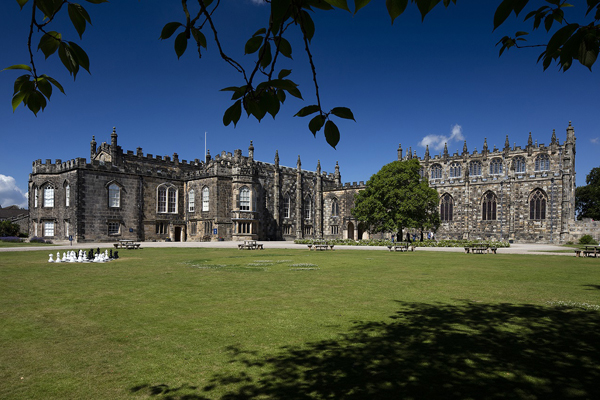 The untold stories of one of the region’s most historic castles have been broadcast to the nation in an hour-long television documentary.

Auckland Castle, Bishop Auckland was featured on Channel 5 show, Digging Up Britain’s Past, at 7pm on Saturday, 18 January 2020.

The popular programme has explored legends from British history such as Henry VII and Robin Hood. And, last week it was County Durham’s own powerful Prince Bishops in the spotlight as presenter, Alex Langlands, joined experts in an archaeological dig at 900-year old Auckland Castle.

The excavation, which took place in 2019, revealed more about the lives of the Prince Bishops, men who governed the Palatinate of Durham, a role which gave them exceptional power beyond that of any other bishop in England. Auckland Castle was one of their palaces, places of work and seats of power.

The discoveries shine a light on the impressive size and scale of the Castle’s medieval walls, showing they were at one point, two-and-a-half metres wide and more than seven metres tall.

Inside the Castle’s imposing walls, archaeologists excavated an area outside the Castle’s Great Hall, where they found pieces of glass, cutlery and crockery, which would have been on the Bishop’s table during the 17th century.

Those digging on the site also found scraps of centuries-old food that would have been served at the Bishop’s table. Animal and fish bones, as well as shellfish and lobster were uncovered in a medieval rubbish dump, exactly where they would have been thrown centuries ago by those working in the Castle’s kitchens.

The Digging Up Britain’s Past team also travelled across the country to learn more about Anthony Bek, (Bishop of Durham from 1284-1310), and his medieval way of life. The team visited Dirleton Castle in Scotland, which was besieged by the Bishop’s army, and Corfe Castle in Dorset to get hands on with medieval weapons of war.

The show shone a light on the extraordinary archaeological finds uncovered at Auckland Castle and their contribution towards the understanding of medieval Britain. Many of the exciting finds seen on the programme, discovered during the dig, will be on display in an exhibition at Auckland Castle later this year.

Professor Gerrard led the excavation last summer with archaeology students from the University taking part alongside volunteers from regional charity, The Auckland Project, which owns the Castle.

The excavation is part of an annual programme of excavations in partnership with The Auckland Project with more planned in the future.

Chris said: “Working together with local volunteers from The Auckland Project and Durham University students, we uncovered structures we never knew existed and provided a fascinating window into the lives of the powerful Prince Bishops. The excavation has given us so much new information on the lifestyles of those living at Auckland Castle.

“Every year we find out a little bit more and add to the ever growing story of the Prince Bishops. We are already looking forward to coming back again next year.”

John Castling said: “Having the Digging Up Britain’s Past team on site during the dig was very exciting for everyone and it’s been amazing to see Bishop Auckland feature on television.

“It is great for more people to hear the stories of the Prince Bishops and learn more about the rich history of Auckland Castle and County Durham.”

Auckland Castle featured on episode three of the latest series of Digging Up Britain’s Past on Channel 5 on Saturday, 18 January 2020. The programme is also available to view at any time via Channel 5’s catch-up service, My5.

For more information on the Castle visit www.aucklandproject.org.