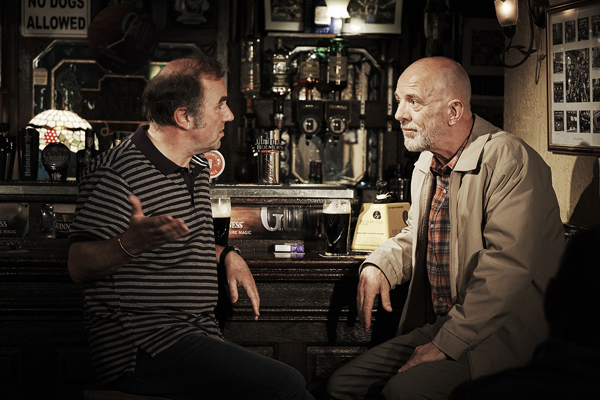 Roddy Doyle’s play Two Pints produced by Abbey Theatre, Dublin, the National Theatre of Ireland, has its British Premiere in the North East when it comes to Live Theatre, Newcastle and The Peacock, Sunderland this September.

This hilarious and provocative play by the Irish novelist, dramatist and screenwriter writer known for hit film The Commitments, novel Paddy Clarke Ha Ha Ha and numerous other novels and plays, started as a conversation on Facebook which gained a large following. Doyle brought the two characters to life in a play, in which two men meet in a pub for a pint, chew the fat, and set the world to rights, which became a sell-out success touring pubs across Ireland last year.

Roddy Doyle said
“When I wrote Two Pints, I didn’t envisage it being performed in a pub, but it is part of the adventure. The play is being put on in a context that is unfamiliar to me – that excites me.”

Joe Douglas, Artistic Director, Live Theatre, said:
“We are delighted to host the British debut of Roddy Doyle’s comedy Two Pints, that has been a sell-out success across Ireland. We look forward to bringing it to audiences in Newcastle and Sunderland, in association with Sunderland Culture and as part of the Culture Ireland GB programme. The show is usually performed in pubs, so at Live Theatre, the bar is returning into the main theatre space. Audiences can get a pint, pull up a chair and listen in to the conversation at the bar. In Sunderland, we are delighted to have the perfect pub-setting ready-made in the beautifully restored The Peacock pub on Keel Square. Wherever you see Two Pints expect big laughs and good craic.”
Starring Liam Carney and Philip Judge, and directed by Abbey Theatre’s Associate Director Caitríona McLaughlin, Two Pints stops off at pubs in Ireland and has its only British dates at Live Theatre, Newcastle, where the bar will return into the Theatre, serving pints of Guinness to audience members, and The Peacock Pub, Sunderland which will stock Guinness especially for the play.

“Bringing Roddy Doyle’s successful and hilarious play Two Pints from Abbey Theatre, who are the National Theatre of Ireland to the Peacock Pub, Sunderland is a real coup following its success being performed in pubs across Ireland. The play will undoubtably be a highlight of the autumn programme of Sunderland Stages, the performance programme of theatre, dance and spoken word presented by Sunderland Culture in venues and unusual spaces around the city.”

‘Achingly, breathtakingly funny’ – Sunday Independent
‘A play about what lies beneath banter’ – The Irish Times
‘It’s an absolute gem’ – The Sunday Times