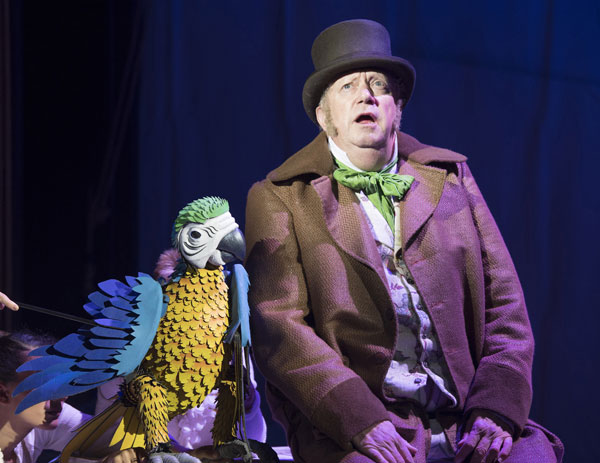 Leslie Bricusse’s acclaimed family musical Doctor Dolittle will burst into the Theatre Royal this February in a spectacular new stage show featuring an all-star cast of puppets and celebrities, celebrating 50 years since the original film!  Expect adventures, fun and lots of feathers, 12 – 23 Feb 2019.

This new production of Doctor Dolittle, with book, music and lyrics by double Academy Award-winner Leslie Bricusse, is part of the 50th anniversary celebrations of the original film starring Rex Harrison and will feature the same songs, including the Academy Award-winning Talk To The Animals.

Eccentric Doctor Dolittle embarks on an extraordinary adventure to find the Giant Pink Sea Snail that holds the secret of life and makes the world a happier place. Helped by his human companions and an exotic menagerie of animal friends, including the Pushmi-Pullyu and trusty sidekick Polynesia the parrot, the larger-than-life Doctor Dolittle teaches us not only to talk to the animals but to listen to them as well!

Mark Williams’s screen credits include The Fast Show, Father Brown, 101 Dalmatians, The Borrowers, Shakespeare in Love and seven of the Harry Potter films.  Brian Capron has won a clutch of awards, including a record-breaking five at The Soap Awards for his role in Coronation Street.  Other well-known television roles include Mr Hopwood in Grange Hill and Ozias Harding in Where The Heart Is; he also appeared as a finalist in Celebrity Masterchef.    Vicky Entwistle’s other television credits include Father Brown and Sandra in Ackely Bridge.

The stunning visual puppetry comprises 36 puppets designed and created by the team responsible for War Horse’s puppetry – the Nick Barnes studio in Hove. Fifteen members of the 25-strong cast operate and voice the puppets which include Polynesia the parrot, Chee Chee the monkey, Gub Gub the pig, Jip the dog, Sophie and Nigel the Seals as well as the seven-metre-long Giant Pink Sea Snail!

Doctor Dolittle is produced by Music & Lyrics Limited, the producers behind the highly successful recent tours of Chitty Chitty Bang Bang, Oklahoma!, Fiddler on the Roof, High Society and The King and I, in association with Churchill Theatre Bromley.