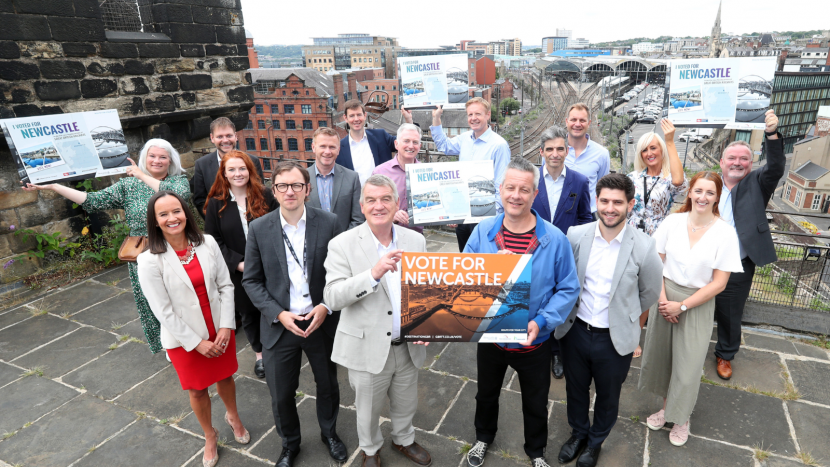 City leaders and key businesses from the North East have gathered to show their support for Newcastle’s bid to become the new home for the Great British Railways headquarters (GBR HQ).

Beating off competition from more than 40 other UK towns and cities, it was announced earlier this month that Newcastle had been shortlisted alongside Birmingham, Crewe, Derby, Doncaster, and York.

The competition seeks to recognise places with a rich railway heritage, strong links to the national network and public support for the selected location, creating a great opportunity to promote communities as the proud home for the start of a new era in Britain’s railways.

Voting is now open to the general public, closing on 15 August with the results being used to measure the level of support for each destination and to be considered as part of the final decision making. The next stage of the competition will involve a ministerial visit to all of the shortlisted locations.

Taking this visit and the public vote into consideration, the final decision will be announced later this year by the Secretary of State for Transport, bringing highly skilled jobs and investment outside of London as part of the Government’s commitment to level up the UK.

With rich historic heritage and relevance as the birthplace of the railways, a pipeline of talent and connectivity to the rest of the UK, Newcastle’s offer is compelling.

This competition provides an opportunity for city leaders, local communities, and businesses to celebrate our railway heritage and highlight the role we could play as the future home of the GBR national headquarters.

NewcastleGateshead Initiative (NGI) led on this bid in partnership with Newcastle City Council and is urging everyone to play their part, vote and support.

“It’s fantastic news that Newcastle has been shortlisted as the location for the headquarters of Great British Railways. We have a strong and proud history with the railways going back generations so I cannot think of a better home for this new headquarters.

“This announcement is not only a vote of confidence in the city, a potentially significant investment, but also the opportunity to bring new jobs to Newcastle.

“We have to compete against five other towns and cities on the shortlist, so I urge as many people as possible to back us in the public vote and let’s win this for Newcastle.”

“This is an extremely exciting opportunity for Newcastle and we’re the perfect candidate. Our history of innovation and our connectivity to the rest of the country means that we are well suited to be a central hub for Britain’s railways.

“This also represents a chance to show the government’s commitment to levelling up by locating the HQ of a large national institution in the North East and providing jobs and opportunities for the people living here and the next generation. If successful this will reinforce the regional pride we have as a leading destination to live, work, and build a business.

“It’s fantastic to have the immense support of the business community, but we also want the public to know what this could mean for them and why they should be loud and proud about why Newcastle is the ideal home for GBR HQ.”

“The North East was once the home of the locomotive – it should be again. Stephenson’s Rocket was built at Forth Street Works, right next to Newcastle Central Station.

“We are uniquely positioned to link our rail heritage to a new 21st century headquarters. Newcastle offers a perfect base for Great British Railways.

“This would be a symbolic homecoming and fantastic opportunity to create new jobs.”

“The whole region is behind the bid to bring the HQ of Great British Railways to Newcastle. The rich industrial heritage of the area and our connection with the start of all that transport history make the North East the perfect place for this accolade – not to mention the economic boost this would provide.

“I’d urge everyone in the North East to get behind Newcastle and vote for it to be the location of the Great British Railways HQ. It would be amazing if the location could be the site of Stephenson’s Works – engines like the Rocket and Locomotion were made here and sent all over the world – building economies and even nations! Vote for Newcastle to bring the railways back home.”

To find out more visit www.ngi.org.uk/GBR