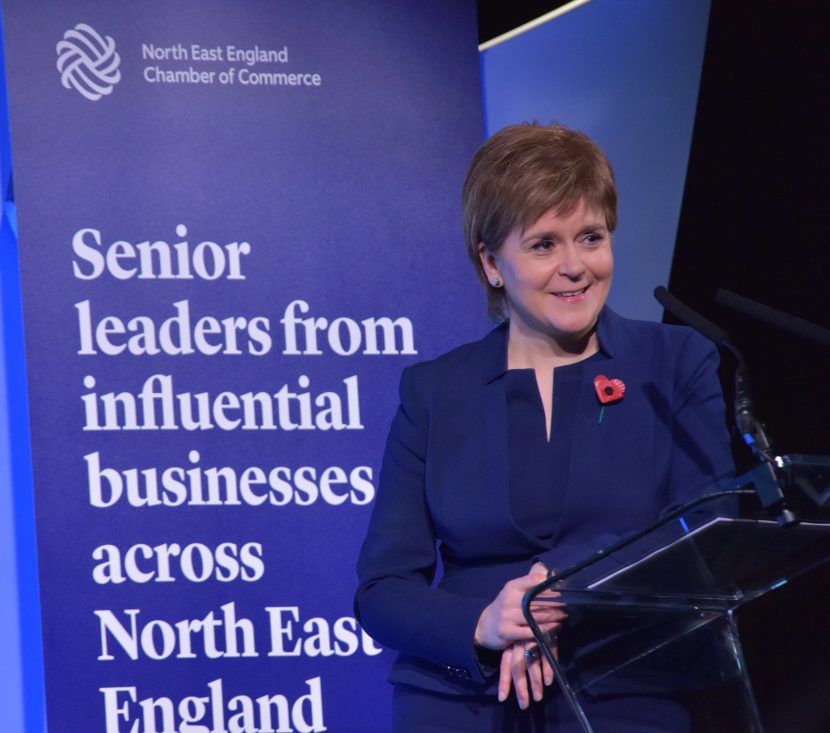 Scotland’s First Minister Nicola Sturgeon told over 200 North East England Chamber of Commerce members, she is seeking to improve links to the region’s transport infrastructure as it is a vital foundation for Scotland’s own access to markets.

Speaking at the Chamber’s President’s Club lunch held at the Hilton Newcastle Gateshead she said: “We have thousands of people crossing the Scottish border into England every day for business and pleasure.  Our transport links through the North East such the Port of Tyne and Newcastle International Airport are the bedrock of our own infrastructure.”

At the lunch she also announced feasibility studies were being commissioned to identify options to improve train journey times, resilience and reliability on services between Scotland and England. She said: “One of the aims of this work is to help reduce the journey time between Edinburgh and Newcastle by a third to one hour This will enhance the opportunities for trade and leisure travel between these great cities.  It will also send a serious signal of intent that we are not just waiting for solutions to come from the South.”

The First Minister also spoke about common causes of both Scotland and the North East such as the need to influence the Government’s Industrial Strategy so it meets the needs of business.

She said: “Greater devolution would help give the North East a competitive edge and Scotland could be an ally for you.” She cited her Government’s decision to work towards the abolition of Air Passenger Duty as a potentially useful example of the benefits of devolution in practice.

“The prosperity of the North East matters to Scotland such are our interconnections. It makes sense for us to work together on issues including tourism, education and business.”

James Ramsbotham, chief executive, North East England Chamber of Commerce said: “We were delighted to hear Scotland’s First Minister speak about the need to strength transport links to our region.  It further emphasises the importance of our campaigning to get key road infrastructure improvements such as the A1 upgrading, on the national Government’s agenda.”

The President Club’s lunch was sponsored by Deloitte.