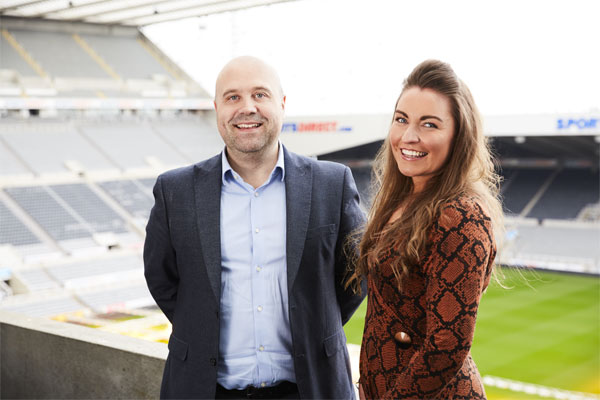 One of the UK’s most famous football grounds has boosted its catering, events and hospitality team with two new signings.

In his new role, Sean will head the Sodexo management team in delivering catering and events services at Newcastle United.

A keen Newcastle United fan, he brings more than 20 years’ experience to the position having held senior roles at hotels and conference venues across the UK, including five-star Stoke Park, Bucks, which has been the setting for countless films including Goldfinger and Bridget Jones’ Diary.

Supporting Sean will be fellow new recruit, Jenny McNamee who, in her new role as meetings and event sales manager, will oversee and develop the venue’s corporate and leisure business.

Jenny, from Shotley Bridge, County Durham, who has worked extensively in sales and hospitality, will be tasked with driving new business to the stadium and increasing its event bookings.

She brings a wealth of experience in the sector having worked for a number of high- profile Tyneside leisure outlets and as sales coordinator at Sunderland AFC’s Stadium of Light stadium.

Sean and Jenny join an already established and experienced management team for Sodexo, which has been the stadium’s catering partner since 2008.

“St. James’ Park is not only one of the sports world’s most iconic stadia, but its hugely versatile event spaces make it a popular choice for everything from small meetings and private lunches to gala dinners, conferences and AGMs,” said venue and events marketing manager, Natasha Carr.

“Sean and Jenny both bring considerable skill and expertise to the team and will be invaluable in helping us build the business, while ensuring our corporate and leisure clients continue to receive the highest possible standard of service.”

For further information or to arrange a site visit of the meeting and conference suites call the events team on 0191 201 8525 or e-mail events@nufc.co.uk.