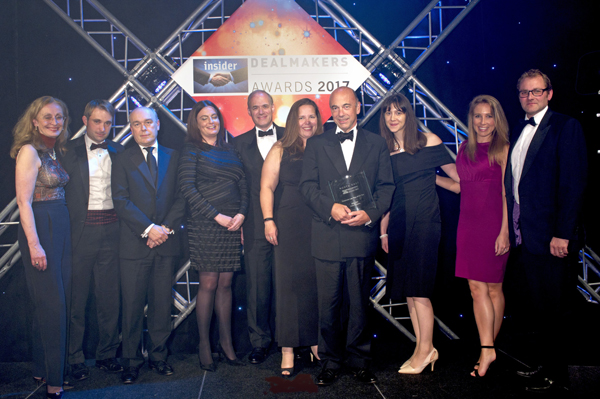 Ward Hadaway has been named Corporate Law Firm of the Year at the North East Insider Dealmakers Awards 2017.

The UK Top 100 law firm received the accolade at the awards at the Hilton NewcastleGateshead last night, an event which saw the cream of the region’s corporate finance community gather to celebrate the sector’s success over the past 12 months.

It is the second major award which the Corporate team at Ward Hadaway’s Newcastle office has won this year.

In June, the firm won Corporate Team of the Year at the Northern Law Awards.

Martin Hulls, Partner and Head of Corporate at Ward Hadaway, said: “We are absolutely thrilled to win this latest award, which is a tribute to the hard work, expertise and dedication of everyone in the fantastic team here at Ward Hadaway.

“In our work, we always strive to deliver the best service and the best result for our clients, and it is deeply gratifying to have this acknowledged with this award.

“It would not be possible for us to win awards like this without our clients so this award is as much theirs as it is ours.

“We also want to thank the corporate finance community across the region – this award is voted for by them so it is very pleasing to see the esteem in which we are held by our peers, our contacts and our colleagues in the North East.”

Organisers of the North East Insider Dealmakers Awards 2017 commented on how Ward Hadaway has advised on “a number of landmark deals” over the past 12 months, including the sale of Sunshine.co.uk to On The Beach plc and Adlington Capital’s acquisition of Van Mildert. Both of these deals were also shortlisted in the Deal of the Year categories of the awards.

“They work extremely hard and with tremendous expertise on matters of great importance to our clients.

“On a wider scale, their work helps to keep driving the region’s economy forward so it is very pleasing to see their contribution recognised in this way.”