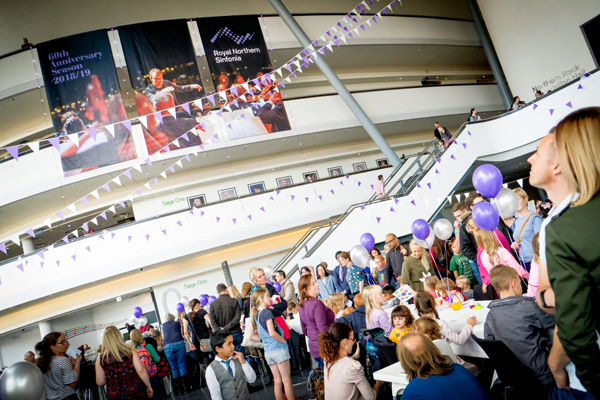 Sage Gateshead was packed with people of all ages celebrating the 60th birthday of their orchestra – Royal Northern Sinfonia – at the weekend.

Friday 21 September marked the opening of the orchestra’s 60th season with a very special RNS Rocks concert, which saw Royal Northern Sinfonia collaborate with some of the best loved indie rock artists from the North East – Maximo Mark, Field Music and Martha Hill.

Hundreds of children enjoyed a birthday Classics4Kids concert in the main hall (Sage One) before getting stuck into cake and party games, with members of the orchestra, on the concourse.

After the concert the first of the season’s new ‘Encore’ commissions was unveiled. Sage Gateshead has commissioned three composers (Errollyn Wallen, Tansy Davies and William Marsey) to write encores to be performed by the orchestra at the end of selected concerts during the season.

But the party didn’t stop there. After the concert the audience joined RNS musicians and the Sage Gateshead team for a party on the concourse with music from the Mini Big Band. At midnight the champagne corks popped and a special cake was brought out, cut by Lars and RNS Leader Bradley Creswick, with a special toast made to the orchestra.

A special project called 60 @ 60 Audience Portrait also opened outside Sage One. Over the year, 60 photographic portraits of audience members, together with their memories of RNS over the years, will be on display. An RNS 60 Exhibition also went on display, featuring key events and faces from the first decade of Northern Sinfonia. It will develop over the season until the whole history of the orchestra has been covered.

Last season half of the orchestra’s performances were outside the building, across the North of England. At the same time audience numbers in Sage Gateshead have increased by 15 per cent. The total live audience for RNS in the past season was 100,000 people and via stream or broadcast, two million. In both cases this is over double the audience three seasons ago.

Last season RNS worked with amateurs, supported emerging composers, collaborated with an able/disabled dance company and a homeless opera company to create new shows, opened an opera house and continued to build initiatives which seek to give people a first experience of classical music (a free first ticket for any Gateshead resident, £5 tickets for anyone under 18, Baby Sinfonia and Classics4Kids). Two years ago RNS also undertook their first international touring for seven years.  Last season they toured nine different countries, giving 25 performances.