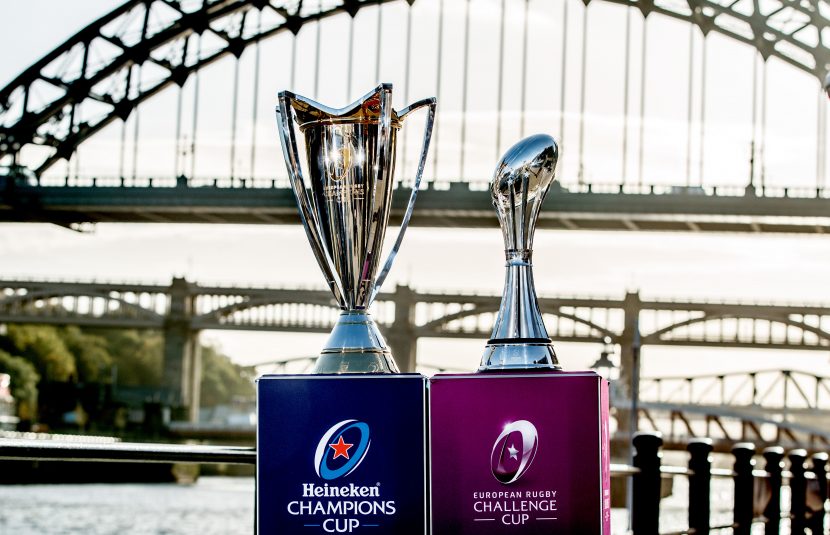 With three months to go until the Heineken Champions Cup Final at St James’ Park, organisers have released further details of what fans can look forward to in Newcastle.

Taking place over the weekend of 10-11 May 2019, Newcastle is hosting European rugby’s biggest weekend, with the Challenge Cup Final on Friday night and Heineken Champions Cup Final on Saturday both being held at St James’ Park.

Fans can expect a carnival atmosphere over the weekend with an official fan zone, Champions Rugby Village, on Newcastle Quayside, as well as other activations throughout the city. The Champions Rugby Village will run from underneath the Tyne Bridge through to the Millennium Bridge and will be full of family-friendly activities, food and drink stalls and a stage and big screen for entertainment.

The Champions Rugby Village will begin on the afternoon of Thursday 9 May and be open between 11am and 11pm on both Friday and Saturday before a spectacular firework display will bring it, and the weekend, to a close on 11pm on Saturday night.

As well as the Champions Rugby Village on the Quayside, fans will be able to enjoy other activations throughout the city at Baltic Square, Blackett Street, Strawberry Place and St James’ Park metro car park. Further details on these activations will be released nearer to the finals.

Newcastle 2019 is the fastest-selling Heineken Champions Cup final ever, with fans waiting for news of a further, limited release of tickets on general public sale as allocations for fans of finalist clubs are being re-assessed throughout the season. Tickets for the European Rugby Challenge Cup final are also showing healthy sales and it is on course to be one of the most attended finals ever.

Before the weekend itself fans in the region will be able to get a slice of the action when the Heineken Champions Cup and European Rugby Challenge Cup trophies embark on a tour of the region. Community groups, businesses, rugby clubs and schools will all be part of the Trophies Tour which will take place from Saturday 23 March until Sunday 14 April.

The trophies will travel throughout the region to over 50 separate events including the Melrose Sevens, at Carlisle Rugby Club and on game days at both Newcastle United and Middlesbrough Football Clubs. The Trophies Tour will reach the next generation of rugby fans as several schools throughout the region will be part of it, as will business venues and public spaces, such as the Grainger Market in Newcastle. Full details of the route will be released shortly.

Mick Hogan, Newcastle 2019 event director, said: “The excitement around the Newcastle 2019 Finals is really building now and the plans announced today will further enhance the experience for fans over the weekend. There’s no doubt that Newcastle will offer a world-class experience for visitors thanks to the location of St James’ Park right in the city centre and the range of activations – there will be something for everyone; from family-friendly games and events through to bars and big screens for fans.”

“In the build-up to, and during the weekend itself, we are looking to engage with a wide range of communities in the region. As well as the rugby community, we want to attract new people to the sport and build excitement for what promises to be the greatest weekend in rugby.”

Organisers have also revealed a local mascot for the finals weekend that will accompany the trophies and promote the finals moving forward. Harking back to Newcastle’s seafaring heritage and linking to the city’s coat of arms, the local mascot is a seahorse.

Rugby fans from across the region can play a key role in the finals and enhance the experience of visitors by volunteering during the finals weekend. Organisers are looking for 250 volunteers, known as The Cast, who will carry out a range of essential tasks to help make the weekend a success.

During, and in the run up, to the finals weekend fans will also be able to make use of the official Newcastle 2019 app being specially designed to improve the fan experience. The app will provide navigation, as well as practical information about the city, fan village and stadium.

For all the local activity taking place, there are opportunities for businesses to get involved and support the finals. The Newcastle 2019 local partnership programme will shortly unveil a number of local partners that will support the Champions Rugby Village, volunteer programme, official app and Trophies Tour.

EPCR Director General, Vincent Gaillard, said: “Newcastle is the latest ‘Destination Finals’ event for European club rugby and these various initiatives will not only engage the local community but promise to also raise local excitement for the weekend in May. The city of Newcastle is getting exposure through improved TV platforms for the tournaments – in the United Kingdom and across the world. With this programme, they can build a greater legacy closer to home.”

It is estimated that overall the finals weekend will have an economic impact of over £30 million, with tourism businesses, bars, cafés, restaurants, travel companies and taxis all set to benefit from travelling rugby fans.

Cllr Kim McGuinness, cabinet member for culture, sport and public health at Newcastle City Council said: “This is going to be a phenomenal weekend of sport in the city. We’re excited to be hosting this major tournament and we’re getting the city ready to provide a fantastic fan experience and showcasing the very best that Newcastle has to offer.

“Whether you are a rugby fan or not, Newcastle is the place to be this May, with lots of events and activities happening across the city, including a huge fan village on the Quayside. So come down and join us for what is going to be one of the best events the city has ever seen.”