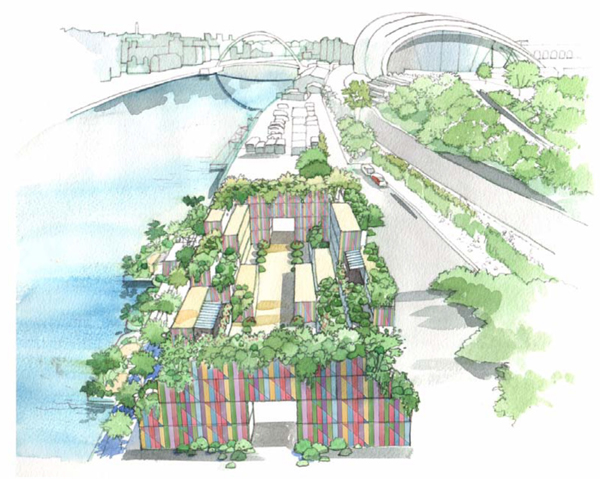 Ambitious plans by Chelsea Flower Show gold medalist and TV garden designer Diarmuid Gavin to set up a “majestic and unique” urban garden on the banks of the Tyne have been unveiled today.

The temporary installation for the site between the Swing Bridge and HMS Calliope on Gateshead Quays aims to create a cultural oasis – and be the largest container garden in the world.

Plans which are subject to a planning application have now been submitted to Gateshead Council. The scheme is proposed to include open areas of trees and mixed planting alongside shipping containers that would house retail and catering units, art exhibitors and start-up businesses.

It aims to bring together cultural and social initiatives working alongside local businesses whilst also creating a key visitor destination for the 2018 Great Exhibition of the North and the NewcastleGateshead World Transplant Games in 2019.

The proposed plans for the urban garden are for up to 90 shipping containers to be installed on the 192 metre-long site at Hillgate Quay which would have two main areas:

The Plaza Garden would have 30 shipping containers set out to create open walkways and an enclosed area.  It would house start-up businesses, shops, galleries, cafes and food outlets.

The Main Urban Garden would have 60 stacked shipping containers to represent a walled garden.

The submission of the planning application is the first stage of the project which is planned to open in June 2018 to coincide with the start of the Great Exhibition of the North.

This is a commercially funded scheme which will be funded by private investment and commercial opportunities which is being raised by the developer.

Gateshead Council already has ambitious plans for Gateshead Quays which includes a 12,500 seat regional arena and conference and exhibition centre plus hotel, bars and restaurants which is due to pen in 2021.

Trees are planned for the roofs of the containers along with fruit and vegetables which would supply the catering outlets. Wooden crates will be used to grow food including wheat, corn and hops throughout the urban garden.

It’s estimated that over 200,000 people could visit the site annually.  Up to 100 people would work at the site with the garden being maintained by National Trust gardeners and volunteers.

A planning application for the scheme will be considered by Gateshead Council’s planning committee later this year.