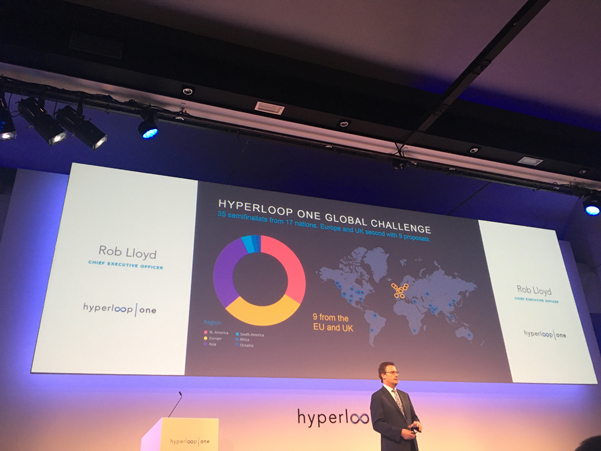 The Northern Arc proposal was revealed as one of nine shortlisted routes spanning the continent as part of Hyperloop One’s global challenge, at the Vision for Europe summit held at in Amsterdam.

Hyperloop One and the winning engineering and design partners will offer Europe’s transport grid an option that is more efficient, greener, on demand and faster.  From over 2,600 international entries, nine European entries have been shortlisted – Germany, Estonia-Finland, Spain-Morocco, Corsica-Sardinia, The Netherlands, Poland, UK Scotland-Wales, UK Northern Arc and UK North-South Connector.

The Northern Arc route covers Liverpool, Manchester, Leeds, Newcastle, Edinburgh and Glasgow, aims to create a coordinated, government backed, deliverable proposal which will connect Scotland with the Northern Powerhouse partners to create a super region and showcase the north of England as a global leader of transport innovation.

With Hyperloop One, passengers and cargo are loaded into a pod and accelerated gradually via electric propulsion through a low pressure tube.  The pod quickly lifts above the track using magnetic levitation and glides at airline speeds for long distances due to ultra-low aerodynamic drag.  It is designed for higher energy efficiency per passenger mile than traditional modes of transport, curbing emissions and fuel consumption. Using Hyperloop One technology, the Northern Arc route has the potential to connect 10.4m people across the six great cities of the north with the total journey time of 47 minutes.

The Northern Arc team have received strong levels of support on the submission from NELEP, and have engaged with the Department for Transport, BEIS and a range of other local authorities and regeneration agencies.

The route would link Manchester, Newcastle, Edinburgh into an integrated northern arc airport with secure city check ins in Glasgow, Leeds and Liverpool and with proposed extensions to Aberdeen, Belfast and Hull, Northern Arc will connect all the major ports in the north of the United Kingdom, providing the opportunity to transform domestic distribution and significantly reducing congestion and C02.

By the end of 2017, Hyperloop One will have a team of 500 employees dedicated to bringing the technology and the winning Global Challenges routes to life.