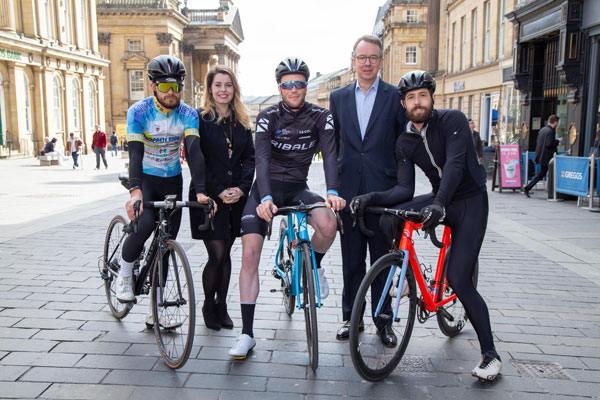 NE1 Ltd in partnership with Newcastle City Council and British Cycling are delighted to announce that Newcastle has been chosen to host a major, elite HSBC UK | National Circuit Series cycle race, which will be staged in the heart of the city centre on the evening of Wednesday 10 July.

This is the first time in over 20 years that a race of this kind has been staged in the city and it is a coup for Newcastle to be named as the venue for one of only six races in the HSBC UK | National Circuit Series.  The series attracts some of Britain’s best cyclists including former Olympic and European Champions and riders and race teams who compete in other world-renowned events including the Tour de France.

The route will be a tight, technical street circuit around Newcastle’s listed Grainger Town with a number of 90-degree bends along the route.  The course will be challenging for the technically skilled competitors and, largely on the flat, will be a fast-paced event. The race will last for approximately an hour with the riders doing multiple laps of the course passing many of Newcastle’s famous buildings, shops and retailers as they speed around Clayton Street, Nelson Street, Grey Street, the Bigg Market and Nun Street reaching speeds of up to 50 KPH.

A winner’s podium will be set up at Grey’s Monument with parking suspended on a number of surrounding streets to enhance the area for spectators and for the prize presentation ceremony.  A winner’s jersey will be awarded at the end of the Newcastle Nocturne race with an overall series winner announced at the end of the six-race series..

Crowds are expected to line the route to see the riders and watch the fast-paced cycling action, which promises to be an exciting addition to the elite series with Newcastle providing the most northerly location and a unique city centre setting.  Prior to the races, the teams and their entourage will descend on the city in pro-team mobile workshops and tour buses to occupy a race zone near Grey’s Monument where bikes will be on display as riders and support staff gear up for the main event.  Autograph hunters and cycling enthusiasts will be able to congregate here to see their heroes and witness all the race preparations.

As a warm up to the main, men’s elite race in Newcastle, an under-16s youth support event will be staged. Some of Britain’s leading U14 and U16s racers will line up to race on a reduced sized circuit, an event that will last for approximately an hour.

The series is now one of the major highlights of British Cycling’s road racing calendar attracting some of the country’s best riders. The sport is continuing to grow and attract more supporters and participants.