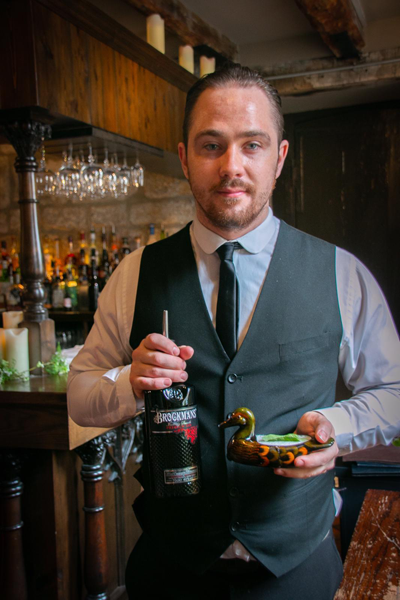 A mixologist from Newcastle has been voted the second best mixologist in the world and top in the UK in a world-wide gin-making competition.

Joseph Miller, a bartender at Blackfriars Restaurant on Friars Street in Newcastle, beat 272 mixologists from 18 countries in the #Brocktail contest organised by Brockman’s Gin.

In first place came Maksim Evseev, chief bartender at the Brothers Bar and Grill in Vladivostok, Russia and third was Andrea Forni from La Gintoneria di Davide in Milan, Italy. All three finalists won an expenses-paid trip of a lifetime as guests of Brockmans Gin to ‘Tales of the Cocktail’ in New Orleans, an annual magnet for the bartending profession for which Joseph is currently learning more about his trade and enjoying the sites of New Orleans.

The competition attracted a record number of nominations and voting was entirely by members of the public which had 30,000 votes in the run-up to World Gin Day 2019.
Joseph’s winning cocktail was inspired by the city’s charity shops and was called Ping’s Obsession.

He said: “There was no particular theme to the competition which was quite hard for me as I like to have a theme. I got inspiration from walking around charity shops in Newcastle looking at various drinking vessels. I found a set of two ducks which seemed ideal.”

The idea was forming in Joseph’s head of a far-eastern slant to his cocktail competition entry and he also referenced a 1933 children’s book, Ping, about a little duck that gets lost in the Yangtse River. I then began to piece Asian-style elements together for the cocktail”

Blackfriars Parlour Bar is located next to the restaurant on Friars Street and is the oldest standing bar in Newcastle, having been the original Parlour for the Dominican Friars when guests came to visit the city. It’s now open throughout the day and evening serving coffee, tea, wine, cocktails and beer from 11am-midnight.

Enjoy Ping’s Obsession or other cocktail in the Parlour Bar and take advantage of Blackfriars’ 2 for £10 offer which is available from 5-7pm Monday – Thursday. Expires 26 November 2019.