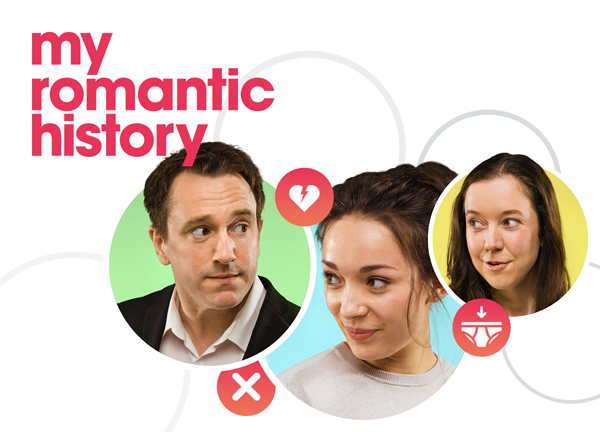 Live Theatre’s new, updated production of My Romantic History written by D.C. Jackson (one of the writers for Chanel4 series Fresh Meat), a hilarious comedy about the love, life and romantic entanglement of thirty-somethings Tom and Amy opens at the Quayside based theatre between Thursday 19 April and Saturday 12 May.

Tom’s got a new job and zero love life. But after getting together on a Friday night drink with Amy from the office they start a whirlwind romance more like a category 5 hurricane. Following three thirty somethings, this laugh out loud comedy shows that there’s two sides to every story, especially when your romantic history is ‘as complicated’ as Tom and Amy’s. Live Theatre’s production of this award winning play has been specially adapted for the North East and is directed by Emeritus Artistic Director Max Roberts.

Max Roberts said: “D. C. Jackson’s My Romantic History is a superb contemporary theatrical take on the genre of ‘romantic comedy’. The play has proved to be phenomenal success internationally and has been produced across the world which is a testimony to its universality and broad appeal. Daniel has edited and updated his script and allowed me to specifically relocate it here and now in the North East. It’s been a hugely enjoyable process. The superb cast of incredibly versatile and charismatic actors are all blessed with brilliant comic timing – a pre-requisite for a play packed with laugh out loud moments, a fast moving and compelling narrative that ultimately reveals a touching and heart felt humanity that I believe will universally resonate with our audiences young, old and in between. Our aim is to provide a really cracking night out in the theatre that makes us laugh but at the same time touches our hearts and reflects upon the all too fragile and complex nature of love, sex and our need to be involved in relationships”.

My Romantic History is suitable for ages 16+ and runs at Live Theatre between Thursday 19 April and Saturday 12 May. Writer D.C. Jackson will give a Meet the Writer Talk after the 2pm performance on Saturday 21 April and a Meet the Cast Talk will talk place after the 7.30pm performance on Thursday 26 April. Both talks are FREE for attenders that evening, and will be made available to listen again on Live Theatre’s website shortly afterwards at www.live.org.uk/talks.

Tickets cost between £10 and £22 with concessions from £6. Young people aged 25 and under can now claim concession price tickets from £6 at Live Theatre with proof of their date of birth.