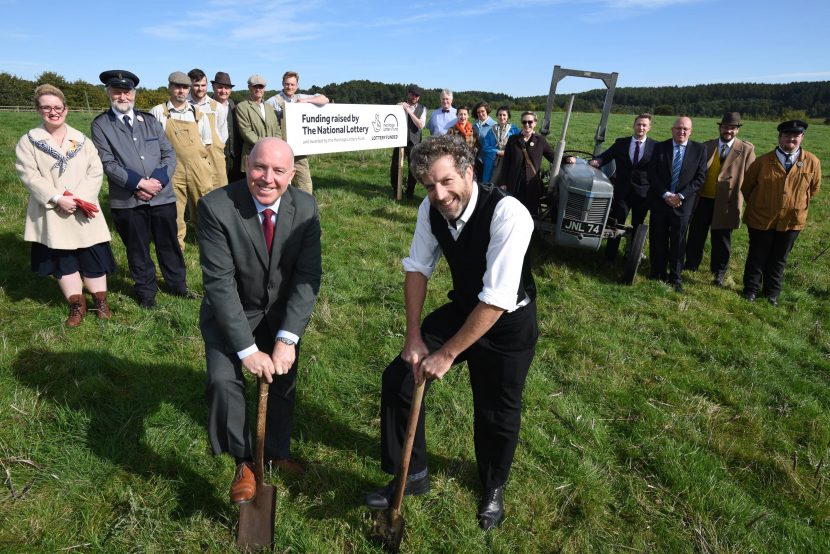 Dated: 22/09/2017 The first steps were taken in creating a new 1950s town at Beamish Museum today (FRI) where the ground was broken on the new £18m project, the largest of its kind in the museum's 47 year history. Pictured is Museum Director Richard Evans and Ivor Crowther, Head of Heritage Lottery Fund NE. See PRESS RELEASE.

Building work started today (Friday 22 September) on the £18million expansion of Beamish, The Living Museum of the North – the biggest project in its history.

A ground-breaking ceremony was held at the open air museum for the Remaking Beamish project, which will see the addition of more than 30 new exhibits, including a 1950s Town, Farm and a Georgian coaching inn, where visitors can stay overnight.

Thanks to the money raised by National Lottery players, the project has been awarded £10.9million by the Heritage Lottery Fund (HLF).

Richard Evans, Beamish’s Director, said: “After years of careful planning we are really excited to be starting this major project, creating new ways for visitors to experience Beamish and learn more about everyday life in the North East of England through time.

“This is the largest project we have ever undertaken – so this is a major milestone in the history of Beamish. We are looking forward to the future with great optimism as we continue to grow and attract even more visitors to our region.”

The Remaking Beamish project is expected to create nearly 100 new jobs, and training opportunities, including 50 apprenticeships. An extra 100,000 tourists are set to be attracted to the region. The museum will remain open throughout the building programme.

The 1950s Town will feature a cinema – being moved from Sunderland – community centre, homes, shops, cafe, bowling green and fish and chip shop. Aged miners’ homes will provide a dedicated centre for older people, including those living with dementia. Artist Norman Cornish’s former home will be recreated, including the studio he donated to the museum.

Spain’s Field Farm, from Weardale, has been deconstructed and will tell the story of rural life in the 1950s.

The expansion of the 1820s Landscape will include a coaching inn where visitors can stay overnight and a recreation of murdered Joe the Quilter’s cottage.

A trolleybus system and restored buses will transport visitors, while a Northern General bus depot will support Beamish’s work to pass on heritage engineering skills.

Buildings from across the region, including County Durham, Tyneside, Wearside, Teesside and Northumberland, will be moved, such as the farm and cinema, or replicated.

Ivor Crowther, Head of the Heritage Lottery Fund (HLF) North East, said: “Thanks to money raised by National Lottery players, we’re delighted to support Beamish as it prepares to open the door to another decade of North East life. As one of our region’s most popular attractions, Beamish is in a fantastic position to put audiences from near and far at the heart of our heritage.

“It’s fantastic to celebrate the beginning of the project’s building work, which will see National Lottery investment used to build the much-anticipated 1950s Town, establish a pioneering wellbeing centre, create jobs and training opportunities and secure a bright future for Beamish, its staff and the hundreds of thousands who visit each year.”

North East firm Seymour Civil Engineering has been contracted to carry out the civil and infrastructure work.

Kevin Byrne, Managing Director of Seymour Civil Engineering, said: “Seymour Civil Engineering is extremely proud to be working on the next phase of the Beamish Museum development. The museum is a regional treasure and a living legacy to the history of the North East, and it’s fantastic that we’re able to support with its continued growth that will allow future generations to experience the region’s heritage for years to come.

“As an experienced contractor having worked on several historic structures and establishments, we understand the importance of projects like this and feel very passionate about using our expertise and skills to showcase the region’s incredible history.”

Find out more about the Remaking Beamish project at www.beamish.org.uk.