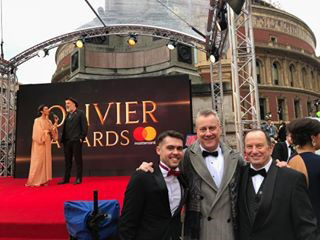 Stephen Tompkinson, Dean Bone and John Bowler, the cast of The Red Lion, and some of the team from Live Theatre attended the Olivier Awards on Sunday 8 April at Royal Albert Hall.

The play, a Live Theatre production which had been a sell-out success at the Quayside based Theatre in April, and had transferred to London’s West End, was nominated for Outstanding Achievement in an Affiliate Theatre. This was Live Theatre’s third Olivier Nomination in two years, a remarkable achievement for a new writing theatre based outside of London (Our Ladies of Perpetual Succour was nominated for two Olivier Awards last year, winning Best New Comedy).