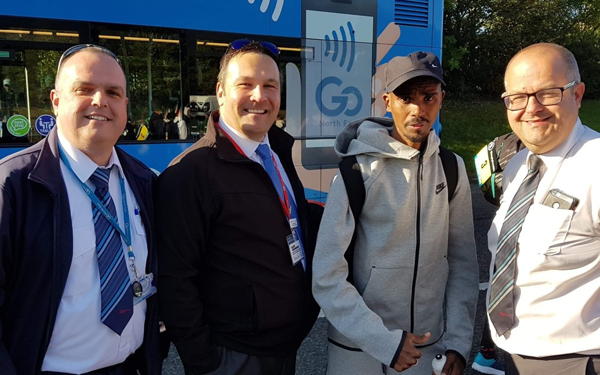 Since the UK’s biggest half marathon began way back in 1981, Go North East has provided baggage and transport services to tens of thousands of participants and supporters each year.

This year, the award-winning bus operator, provided 38 dedicated baggage buses which carried over 25,000 pieces of runners’ luggage, and a team of over 120 drivers, supervisors and engineers safely transported around 10,000 people to the start and finish lines.

Team members also got the chance to rub shoulders with elite competitors, including Sir Mo Farah and David Weir, who travelled on Go North East buses to get to the start and then back from the finish line.

Go North East also had over 30 team members taking part in the run, raising thousands of pounds for charities.

Martijn Gilbert, Managing Director at Go North East, said: “We are immensely proud to have supported the Great North Run for the 39th time, working with the event organisers to ensure it’s a success each year.

“It’s the standout event in the sporting calendar and we owe a great deal of gratitude to our colleagues for keeping everyone moving throughout the day. It’s also amazing to see so many people from the company raising money for great causes – a big thank you to everyone involved!”