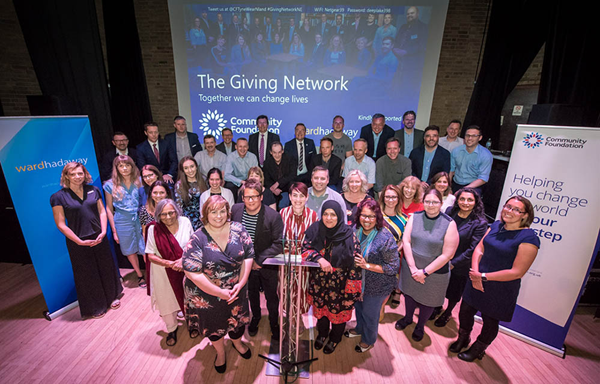 A Giving Network for the next generation of North East philanthropists, created by the Community Foundation Tyne & Wear & Northumberland and supported by law firm Ward Hadaway, has awarded £16,104 to four local charities at its first ever giving event.

The four charities who benefitted are:

The Giving Network brings together young professionals who donate at least £30 a month for local causes. Donations are matched pound-for-pound by the Community Foundation and increased by Gift Aid meaning over £12,774 was raised collectively. In addition to this an additional £3,300 was raised on the night to create a total fund of £16,104.

Lisa Cappleman, Principal Advisor, Giving and Philanthropy at the Community Foundation, said:
“The Giving Network is a great way to meet new people, and give to causes in our community that do great work. The priority in our first year was to support organisations that tackle poverty, improve mental well-being and promote diversity. We’re absolutely delighted that through the network we have generated over £16,000 for charities working in these areas and hope that the network can continue to grow and do good.”

Jamie Martin, Senior Partner at Ward Hadaway, which is supporting the Network, said:
“We are committed to giving back to the communities in our region and are proud to support the Community Foundation’s initiative to encourage others to do so too.”

The Giving Network has 23 members so far, meaning the Community Foundation is well on its way to its goal of bringing together 30 professionals to lead the next generation of philanthropists.