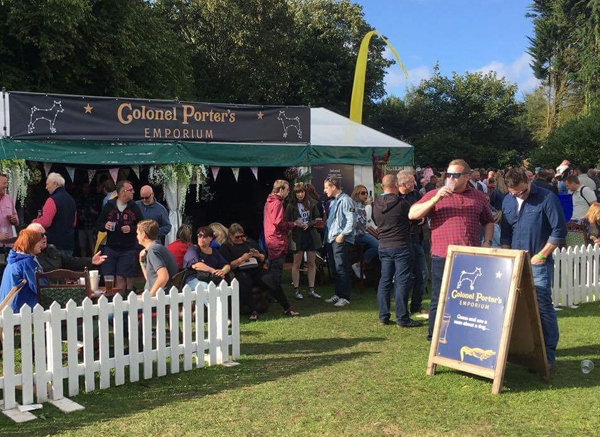 A Tyneside bar, inspired by the explorers and inventors of Edwardian England, is setting off on a new adventure of its own.

Colonel Porter’s Tavern, Botanical Garden and Rhum Bar, at Dean Street, Newcastle, has created a pop-up bar, which mirrors its opulent and quirky interior and has become a familiar sight at a number of North East events this summer.

And now the ‘pop-up Porter’s’ is preparing to tee off to the Tyne Valley, for a special appearance at The British Masters at Close House.

Colonel Porter’s is an official sponsor of the event, which will take place from 28 September to 1 October and will be the biggest golf tournament ever held in the region.

Along with the chance to see golfing stars, such as tournament host Lee Westwood and Major winners Martin Kaymer, Graeme McDowell and Danny Willett in action, visitors will be able to sample a selection of Colonel Porter’s libations.

Throughout the four-day event, the pop-up will be serving an assortment of its 120 rums, along with other spirits, wines, Champagnes and cocktails in a pint-sized version of the Dean Street Emporium.

“Our pop-up is basically Colonel Porter’s in miniature,” said sales manager Chrissie Gladstone, “and it’s already proved a huge hit at a number of events across the North East this summer, including Newcastle Pride, Live and Times Square and Hardwick Live.

“The British Masters at Close House is set to be a fantastic sporting event and we are delighted that our Colonel Porter’s pop up will be firmly to the ‘fore’.’”

Along with a range of cask ales, the venue has an extensive collection of more than 100 rums and hosts a varied programme of unusual events including ‘tipsy teas’ and talks by politicians, explorers and entrepreneurs.