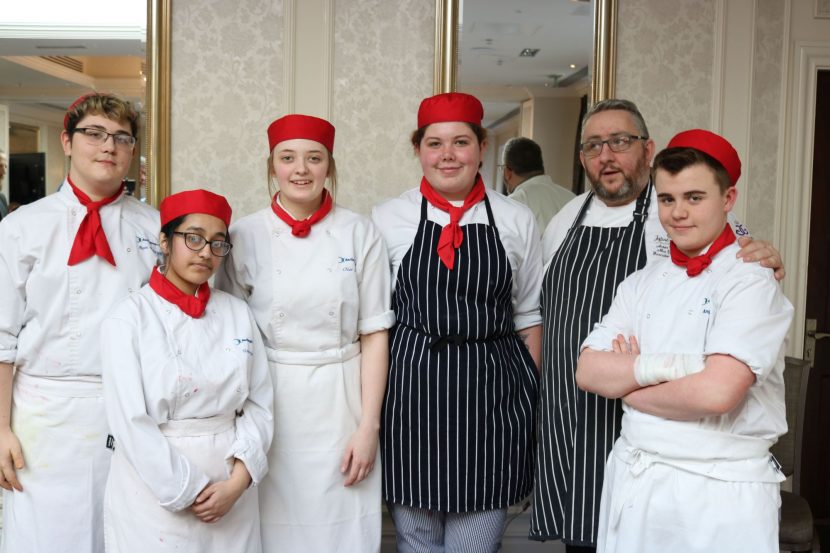 An 18 year old trainee chef from Leyburn has been named the overall winner of Rockliffe Hall’s Aspiring Chef of the Year competition.

Chloe Johnson was one of four catering students from Darlington College to take part in the cook off final on the last day of the five star resort’s Festival of Food on Saturday 8th February.

Chloe’s dessert was chosen as the winning dish by diners attending the special lunch following a tough selection process. Students studying Levels 2 and 3 Professional Cookery or Patisserie and Confectionary courses at the college were first invited to create an aspirational three course banqueting lunch menu, inspired by the North East of England.

Then in January, a winner was announced for each of the starter, main course and dessert categories, following a cook off and judging by the Head and Executive Chefs from Rockliffe Hall’s three restaurants.  At this stage, the judges were so impressed with the dishes that they announced a fourth winner, who created pre-starter at the special luncheon.

Chloe and the three other short-listed catering students then recreated their dishes at the winners’ luncheon on Saturday. Chloe’s dessert of Ginger Cheesecake, Honey Roasted Rhubarb and Rhubarb Coulis was chosen by the diners and won her the overall accolade of Aspiring Chef of the Year.

The three other short-listed chefs were Angus Duncan, 17, from Richmond, Myah Erasmus, 18, from Spennymoor and Ryan Pickersgill, 18, from Colburn.

Chloe says: “I couldn’t believe it when I was chosen to take part in the final of this competition so when my dish was named as overall winner at the luncheon I was even more stunned. It was the most amazing opportunity to cook in a professional kitchen at a five star hotel, for paying guests, and an experience I’ll never forget.”

Aaron Craig, Rockliffe Hall’s New Hall Executive Chef, says: “All four catering students impressed everyone involved in the Aspiring Chef competition. As far as the Rockliffe Hall chefs are concerned, each of them are winners in our eyes and I’m sure they’ll go on to be exceptional professional chefs. Their dishes were outstanding and I’m thrilled for Chloe that the diners chose her dish as the overall winner. This event is very much about helping inspire the next generation of chefs and we all look forward to seeing how their careers progress.”

Catering tutor at Darlington College, Dawn Cobb-Neate, says: “The standard of the food produced by our students at the Aspiring Chef of the Year competition was exceptional. We train our student chefs at Darlington College to the highest of standards and to be able to give them opportunities like taking part in this competition, at such a prestigious hotel, is inspiring.  We look forward to continuing to work closely with Rockliffe Hall to encourage and develop the chefs of the future.”