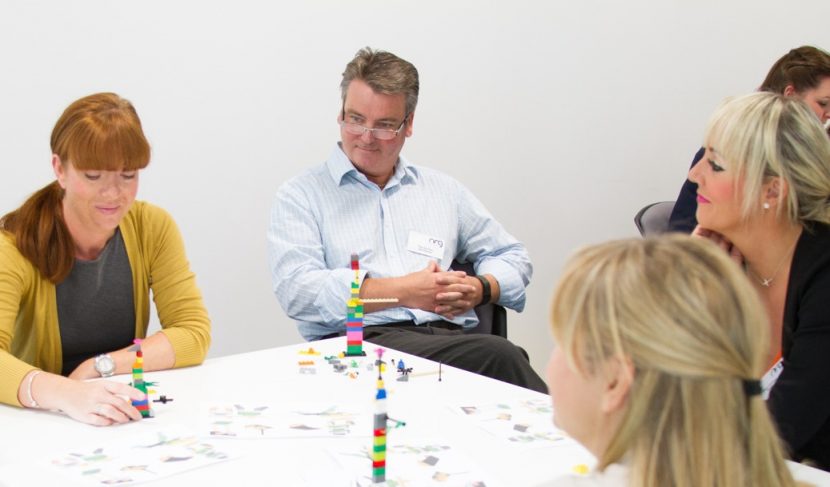 Today professionals from the region’s leading contact centres came together for an interactive LEGO® SERIOUS PLAY® workshop hosted by NRG.

Representatives from each business found out how LEGO® can be used to solve business problems.

The LEGO Group has told children to ‘build their dreams’ for decades and today leaders from the region’s businesses were shown how to tackle business problems using building bricks.

The idea of LEGO® SERIOUS PLAY® originated in 1996 when the two professors were exploring alternative strategic planning tools. They developed an idea using LEGO elements as three-dimensional models of business issues and challenges, which later became known as LEGO® SERIOUS PLAY®.

The feedback from the event – which had a select audience of 30 L&D professionals – was extremely positive.

“The NRG/CCMA LEGO® SERIOUS PLAY® event completely lived up to expectations” said Ray Harrison FCIPD & FLPI, Head of Operational Learning & Development, Barclaycard. He continued: “playing not only offered a new approach to complex problem solving but new ways of thinking, this is one of the most valuable workshop sessions I have ever been involved with”.

Julie Mordue, Client Relationship Manager, NRG echoed this sentiment: “These valued sessions have gone from strength to strength over the last year. Each of our events promotes continuous professional development in the contact centre industry and today is no different.

“At NRG we invest heavily in the creation of forums for professional development and networking so it’s great to see professionals from the North East contact centre community come together and discover new ways of learning. The LEGO® SERIOUS PLAY® session provided extraordinary insight into an accredited programme which can be used within learning and development.”

“We knew that this event would be popular but we did not expect such a unanimous positive response from all parties involved– we are already planning ways to incorporate LEGO® into our other professional development training sessions!”