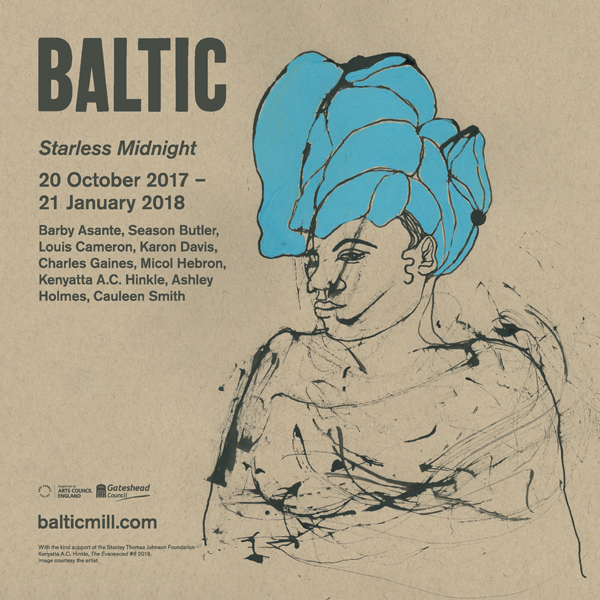 BALTIC Centre for Contemporary Art announces an ambitious programme of three major exhibitions opening Friday 20 October in the UK’s largest contemporary art gallery. They will be led by Turner Prize-winning artist Susan Philipsz with a new installation exploring the relationship between sound and architecture; and a provocative and urgent group exhibition co-curated by US contemporary artist Edgar Arceneaux,

Starless Midnight takes its point of departure from an impromptu speech made by Dr. Martin Luther King. He spoke of the three most urgent challenges faced in the world: ‘the problem of racism, the problem of poverty and the problem of war.’ Despite the advancements of civil rights since this speech, his words still ring true today and are set against a backdrop of political populism, post-truth and so-called ‘fake news’.

Over the course of two decades, Susan Philipsz has experimented with the relationship between sound and architecture. Often choosing the human voice as her primary medium, Philipsz is especially interested in the emotive and psychological properties of sound and how it can alter individual consciousness. At BALTIC Philipsz will stage the presentation of new work, A Single Voice 2017. An adaptation of Karl-Birger Blomdahl’s opera Aniara 1959, the narrative follows a group of colonists who leave a doomed planet Earth behind to set up a new life on Mars.

Edgar Arceneaux’s Until, Until, Until… is a look back at Broadway legend Ben Vereen’s controversial performance at Ronald Reagan’s inaugural celebration in 1981. At this event, Vereen staged a musical number in homage to the trailblasing vaudeville performer Bert Williams who, because of racist laws dictating who could appear on stage, always performed in ‘blackface’ makeup