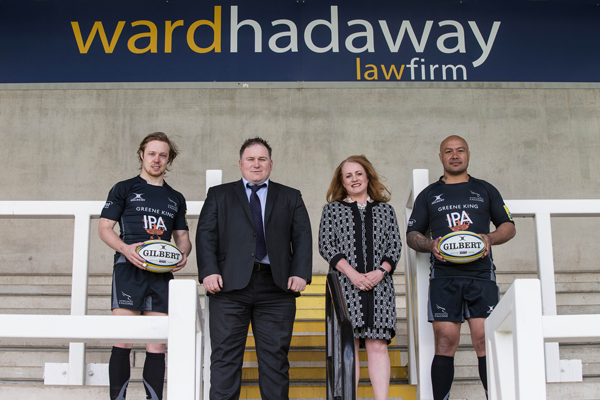 The UK Top 100 law firm, which has offices in Newcastle, Leeds and Manchester, will continue as the Falcons’ official partner and official legal services provider for 2017/18 and 2018/19.

Ward Hadaway’s name will emblazoned across the back of all Falcons’ home, away and European shirts – a position the firm has filled since 2015.

The news comes as Newcastle is confirmed as the host city for European rugby’s showpiece finals in 2019.

One of the UK’s top 100 law firms, Ward Hadaway offers a full range of legal services to clients across the private and public sectors as well as bespoke advice to individuals.

Ward Hadaway is named as one of the leading law firms in the country by independent legal guides Legal 500 and Chambers & Partners.

The firm boasts acknowledged national experts across a wide range of specialist areas and provides commercially-focused advice to many of the UK’s leading businesses and a raft of public sector organisations.

Jamie Martin, Managing Partner at Ward Hadaway, said: “We are delighted to be continuing our backing of Newcastle Falcons for a further two seasons.

“As a northern law firm for national business we have always believed in supporting home-grown talent, and our relationship with the Falcons has proven to be the perfect fit over the past two years.

“It has been terrific to see the side progress over this time and we are excited by the Falcons’ prospects for the next two years.

“We are looking forward to working with the team at Kingston Park and to seeing more top-class rugby, especially with the announcement that Newcastle will be hosting the European Champions Cup, Challenge Cup and European Rugby Continental Shield in 2019.

“It is very exciting to think that the city will be at the heart of European rugby in two years’ time, with Kingston Park playing a major role in this.”